One of the immediate impacts of the coronavirus crisis was a fall in global energy use. While demand will likely rebound to previous levels, the overall energy mix is changing. Renewables are playing a bigger role as traditional sources such as coal become increasingly uneconomic. This trend was already in place when the pandemic hit, but is now proceeding at an accelerating pace.

The coronavirus pandemic has had an immediate impact on energy demand, energy security and renewable energy investment overall, and it has also accelerated some longer-term trends that already existed. Namely, the investment in renewables capacity and related technologies seems poised to slow but not stop. Moreover, power generation and energy consumption from fossil fuels appears ready to decline even more quickly. These developments are clearly positive for the fight against climate change.

The coronavirus has significantly slowed energy demand – for now

Much of the sudden impact of this virus on the energy sector is due to a reduction in demand. High unemployment, greater use of remote working arrangements, and social distancing immediately curtailed the amount of energy that society has been using. If social distancing continues in some respects and the overall economic recovery is slow, many experts believe demand will stay suppressed beyond 2020. It’s even possible that some of these trends in demand reduction – such as the shift to remote working – could be more structural, and perhaps even permanent.

Indeed, there have been significant changes in energy usage since the coronavirus outbreak first occurred in early 2020:

– The International Energy Agency (IEA) estimates that energy demand will plummet by 6 per cent for the entire year, primarily driven by the second quarter.  A 6 per cent reduction would be the largest percentage decrease since World War II, and the largest-ever drop in absolute terms. 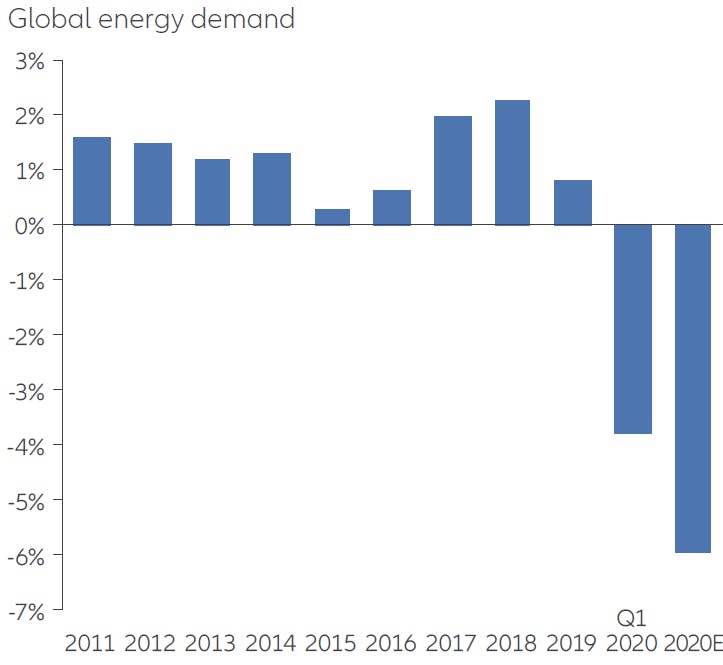 Source: IEA.com. Data as at 31 March 2020. Forecasts and estimates have certain inherent limitations, and are not intended to be relied upon as advice or interpreted as recommendation.

– Energy consumption in the form of electricity was down 2.5 per cent in the first quarter and is predicted to be 5 per cent lower for the year. This is eight times the size of the reduction seen during the 2008 financial crisis.

– Of the 5 per cent decrease in electricity demand in 2020, the IEA estimates that renewable energy demand will increase by about 1 per cent, while demand for coal, gas and nuclear energy will be down 8 per cent, 5 per cent, and 2 per cent respectively.

This shift towards renewables as a percentage of the power mix is attributable to several factors:

– Demand has decreased as people stay home and businesses reduce their output, and renewables are much more cost-effective solutions for a low-demand world once the infrastructure is up and running. Solar systems, wind turbines, and hydroelectric power all cost less than US$0.01 per kilowatt hour (kWh) to operate on average. In contrast, coal, gas, and nuclear power plants have operational costs ranging from US$0.02 to US$0.10 per kWh on average.

– It’s also easier to quickly add or subtract power from natural gas driven turbines versus coal or nuclear, for example. So when natural gas is available, it tends to be used more than coal or nuclear power to fill any demand gaps and to ensure grid stability.

Coal is fighting a multi-front battle to stay relevant, especially in the US and Europe… The story is different among emerging nations: China and India have been using less coal over time, but these are growing countries, and coal will likely be a significant part of their energy mix for the foreseeable future.

The coronavirus is another key threat to thermal coal

Source: 2020 IEA Global Energy Report. Data estimated as at end-2020. Forecasts and estimates have certain inherent limitations, and are not intended to be relied upon as advice or interpreted as recommendation.

Although electricity demand will probably rebound to normal levels, coal is fighting a multi-front battle to stay relevant, especially in the US and Europe. By some estimates, renewable energy may overtake coal in 2020 in terms of global power generation – in large part due to shrinking demand. Developed nations, apart from Japan, have already been significantly reducing their use of coal for electricity generation over the past decade.

Improving battery technology and capacity is increasing the attractiveness of renewables for peak power demand, and there’s a continued transition to natural gas turbines due to lower costs.

Another important factor is that major financial institutions are pulling back from any meaningful business operations associated with thermal coal. This makes it difficult for coal-mining firms and coal-fired power plant operators to obtain financing and insurance, which in turn makes it difficult to conduct business. In fact, the six largest banks in the US and the six largest in Europe have all restricted lending to coal-mining operations, and 10 of the 12 have restricted lending to coal-fired power plants.

The story is different among emerging nations: China and India have been using less coal over time, but these are growing countries, and coal will likely be a significant part of their energy mix for the foreseeable future.

The effect of the coronavirus on oil demand has been mixed

The coronavirus contributed to a clear decline in demand for oil during the first quarter – it was down more than 10 per cent, a reduction of more than 10 million barrels per day of production – and we are on pace for a 20 to 30 per cent reduction in the second quarter. The lockdown policies were the clear and obvious driver here: passenger car miles driven, public transportation usage and air travel all plummeted, at least temporarily. Shipping and trucking also took a hit, but to a much smaller degree, since goods still need to be transported.

Like the thermal coal industry, the oil and gas industry was also experiencing headwinds before the coronavirus hit, with a greater number of global banks and insurers already restricting some financing and insurance aspects of oil and gas operations. However, this has been much more limited than the pushback on thermal coal. In the field of oil production, financial restrictions tend to be more targeted – for example, in the form of limited support for oil sand production or Artic drilling.

But overall, the effect of the coronavirus on oil demand is a mixed bag. We believe four major factors are at play:

What are the implications for investors?

The world is still in the early stages of fully understanding the economic and investment-related ramifications of the coronavirus pandemic – including climate-related policies and investments. Many governments and countries won’t know how their climate change positions will be affected until they have more clarity on their economic and social situations. This is the main reason why COP26 – the largest climate change conference since the Paris Agreement talks in 2015 – has been postponed a full year, until November 2021.

Still, even at this early stage, the coronavirus does seem to have been beneficial for several key aspects of sustainable investing:

– Renewable energy sources have been on the rise, and companies will likely continue to invest in them. For example, corporate power purchase agreements for clean energy reached a record high in 2019 and have fallen off pace only slightly so far in 2020.

– France, Canada and a few other nations have tied some economic stimulus to green initiatives. This could result in rapid growth in green bond issuance, lower costs in electric vehicle battery technology and improvements in hydrogen fuel cell technology. Unfortunately, the US and China have so far missed an opportunity to combine economic stimulus and job creation with greater investment in renewable and clean energy infrastructure.

– Fossil fuels will likely continue to be in less demand overall, thanks to the declining use of thermal coal and oil for both power generation and transportation. We expect this trend to hurt energy companies that are not yet committed to decarbonisation. Investors should be wary of firms that are highly dependent on fossil fuel driven revenue sources over the medium and long term.

– Some of the largest oil and gas companies in the world have maintained their aggressive carbon reduction targets. Although this (and lower oil prices) has hurt their business, it also demonstrates that there is a potential tailwind for investment themes centred on carbon reduction and climate transition.